House Speaker Nancy Pelosi (D-Calif.) is knocking President Donald Trump for apparently leaving Congress in the dark on the recent U.S. strike in Baghdad that resulted in the death of Iranian commander Qassem Soleimani.

The president authorized an airstrike overnight that resulted in the death of Soleimani, the head of Iran’s Revolutionary Guard, at the Baghdad International Airport in Iraq, as IJR reported.
“U.S. military has taken decisive defensive action to protect U.S. personnel abroad by killing Qassem Soleimani,” the Pentagon said.
In response to the attack, the House speaker denounced Trump’s orders, as she said it “risks provoking further dangerous escalation of violence.”

“American leaders’ highest priority is to protect American lives and interests.  But we cannot put the lives of American servicemembers, diplomats and others further at risk by engaging in provocative and disproportionate actions.  Tonight’s airstrike risks provoking a further dangerous escalation of violence.  America – and the world – cannot afford to have tensions escalate to the point of no return.”

Pelosi continued to note that the actions taken by the U.S. were done without consulting Congress, and she called on the Trump administration to brief Congress “immediately.”

“The Administration has conducted tonight’s strikes in Iraq targeting high-level Iranian military officials and killing Iranian Quds Force Commander Qasem Soleimani without an Authorization for Use of Military Force (AUMF) against Iran.  Further, this action was taken without the consultation of the Congress.
The full Congress must be immediately briefed on this serious situation and on the next steps under consideration by the Administration, including the significant escalation of the deployment of additional troops to the region.”

House Intelligence Chairman Adam Schiff (D-Calif.) also made it clear that Congress wasn’t consulted on the actions taken.
“Soleimani was responsible for unthinkable violence and world is better off without him,” Schiff tweeted late Thursday, adding, “But Congress didn’t authorize and American people don’t want a war with Iran. All steps must now be taken to protect our forces against the almost inevitable escalation and increased risk.”
As Yashar Ali reported, “People comparing this to killing Osama Bin Laden don’t know what they’re talking about. This is way more significant. Equivalent to another country killing US Vice-President.”

✔@yashar
16. The Iranian government has confirmed the death of Qasem Soleimani in Iraq.
Now that it’s confirmed, allow me to say in plain English…this is a holy shit moment.
Again not just for US-Iran relations, not just in the Middle East, but a holy shit global event

6,618 people are talking about this

✔@yashar
· 12h
Replying to @yashar
21. Statement from Iran’s Foreign Minister @JZarif on the US operation that killed Qasem Soleimani
“The US bears responsibility for all consequences of its rogue adventurism.” 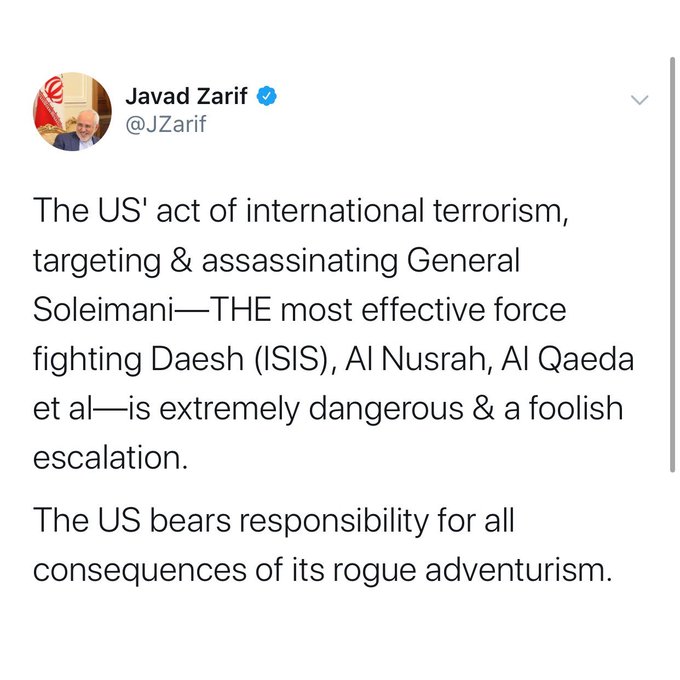 ✔@yashar
22. Statement from Gen David Petraeus (Ret) who knows a lot about Soleimani and had direct communication with him (see earlier in thread)
Via @jaketapper 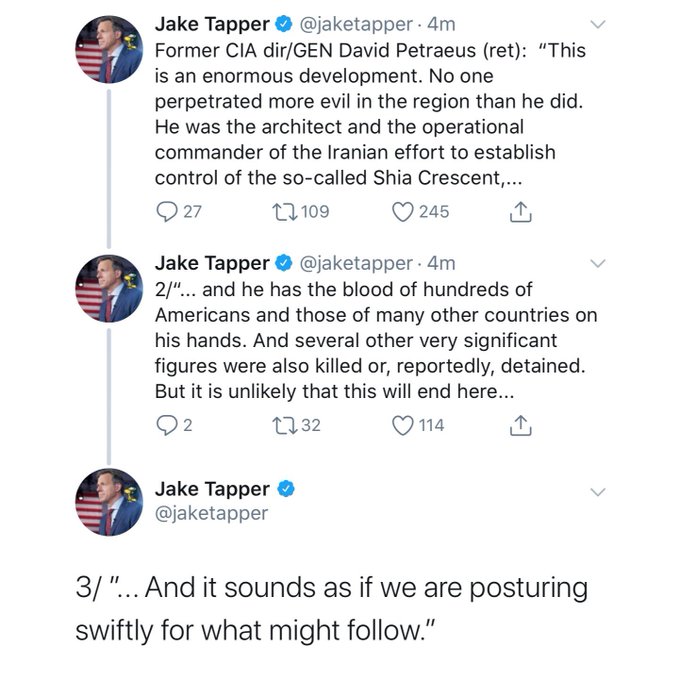 803 people are talking about this
Iran’s Supreme Leader Ayatollah Ali Khamenei has vowed that “harsh retaliation is waiting” for the U.S. for killing the Iranian general. He also declared three days of mourning.
Abu Mahdi al-Muhandis, a top Iraqi militia commander, was killed in the overnight attack as well.
U.S. citizens have been urged to leave Iraq by the U.S. embassy.
The attack comes days after the U.S. embassy in Baghdad was met with violent protests on Tuesday following airstrikes by the U.S., as IJR previously reported.