Anti-Semitic Rep. Ilhan Omar (D-MN) attacked Republicans on Sunday during an interview on far-left MSNBC, claiming that the Republican Party is synonymous with hateful and “sinful” rhetoric.
“There’s a brand around you that has made you a target, even in your re-election,” host Joy Reid said. “We just had members of the Navy during the Army Navy football game were flashing what looked like the white power sign, like these are the things that we’re talking about in the news. How do you process that as somebody who is an elected official, and how do your constituents process it?”
“Yeah, I mean hate, sinful, [unintelligible] rhetoric is very dangerous and it’s becoming synonymous with the Republican Party,” Omar responded. “They have refused to condemn and distance themselves from members within their party that have threatened my life and the lives of others, that have caused the deaths of people in this country who follow their message, and have put their names, the names of our president, and many of the Republican leaders in their manifestos as they have taken innocent lives.”
Omar added, “But what we have to remember is we don’t have to be that; we don’t have to be that country, and so my message has always been love trumps hate. We have a lot of compassion to go around.”
WATCH:

Benny
✔@bennyjohnson
WOW
Watch Ilhan Omar say that Hate is becoming “synonymous with the Republican Party”
I’m old enough to remember when some Congresswoman Tweeted some pretty Hateful things herself. 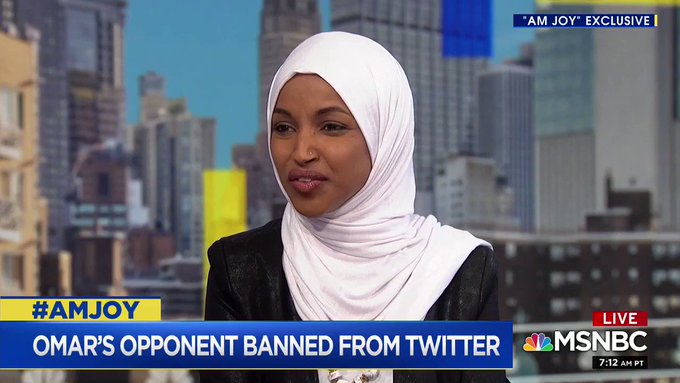 2,036 people are talking about this
Omar has a documented history of being sympathetic to Islamic terrorists. Here are just a few examples:
Omar, who has been praised by former KKK grand wizard David Duke, is among the most anti-Semitic members of Congress.
The following is an excerpt on one example of Omar’s anti-Semitism from a Daily Wire report earlier this year:
In 2012, she tweeted: “Israel has hypnotized the world, may Allah awaken the people and help them see the evil doings of Israel.”
Responding to criticism over the tweet, Omar claimed she was “drawing attention to the apartheid Israeli regime.”
“The oft-repeated notion that Israel is an ‘apartheid’ nation is incorrect on multiple grounds,” The Daily Wire reported in October. The Anti-Defamation League (ADL) refutes the notion that Israel is an “apartheid” nation:

Arab citizens of Israel enjoy the full range of civil and political rights, including the right to organize politically, the right to vote and the right to speak and publish freely. Israeli Arabs and other non-Jewish Israelis serve as members of Israel’s security forces, are elected to parliament and appointed to the country’s highest courts. They are afforded equal educational opportunities, and there are ongoing initiatives to further improve the economic standing of all of Israel’s minorities.

In a New York Times column, Bari Weiss slammed Omar’s conspiracy-minded views on Israel:
The conspiracy theory of the Jew as the hypnotic conspirator, the duplicitous manipulator, the sinister puppeteer is one with ancient roots and a bloody history. In the New Testament, it is a small band of Jews who get Rome — then the greatest power in the world — to do their bidding by killing Christ. Pontius Pilate, the Roman governor, speaks to the Jews about Jesus in the book of John: “Take him yourselves and judge him according to your own law.” But the Jews punt the decision back to Pilate: “We are not permitted to put anyone to death.” And so Pilate does the deed on their behalf. In the book of Matthew, the implications of this manipulation are spelled out: “His blood is on us and our children,” the Jews say — a line that has been so historically destructive that even Mel Gibson cut it from his “Passion of the Christ.”
In the two millenniums that followed, even after 1965, when the Catholic Church formally disavowed the belief that the Jews killed Jesus, this was the template for the anti-Semitic conspiracy: the ability of this tiny minority to use its wiles and its proximity to power to con others into accomplishing their evil ends. It has led to countless expulsions, murders, massacres and pogroms throughout Europe and elsewhere.

The Jewish power to hypnotize the world, as Ms. Omar put it, is the plot of Jud Süss — the most successful Nazi film ever made. In the film, produced by Joseph Goebbels himself, Josef Süss Oppenheimer, an 18th-century religious Jew, emerges from the ghetto, makes himself over as an assimilated man, and rises to become the treasurer to the Duke of Württemberg. Silly duke: Allowing a single Jew into his city leads to death and destruction.

He fought in World War II. He died in 2014. And he just registered to vote in Va.